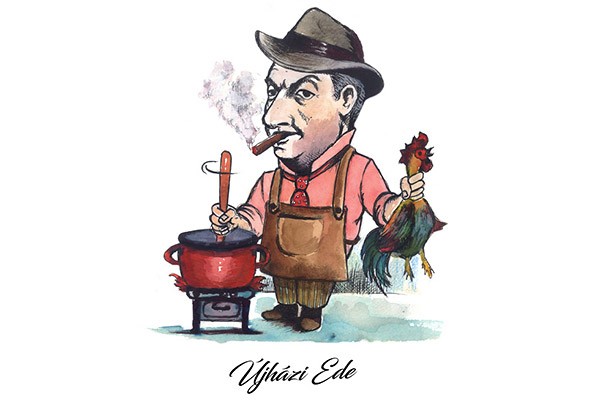 It is most recognised as chicken soup. We might blame many for this misconception, including Gyula Krúdy, the most famous Hungarian “gastro-writer”. In 1932 he wrote: “Ede Újházi, whether he wanted it or not, was often obliged to consume the soup named after him. (…) Art lovers – who were still abundantly found around the act of acting – consumed the soup of Újházi, as if it were a religious ceremony.” According to Krúdy, the soup was made from chicken with noodles and vegetables. Yet, the essence of the Újházi soup was that it was not made from chicken, nor was it made from hens, but from old roosters. In fact, it was not just a simple soup, but also a medicine and aphrodisiac. Whatever genius Krúdy was, we can’t hold him accountable for his gastro-historiological credibility.The true origin of the story was revealed by Endre Nagy, the cabaret and chronicler of Nagyvárad, who was present at the birth of the short-lived but soon legendary “Újházi-pub” in Dohány Street. Ede was helping a fallen actor named Hatvani, to make his restaurant successful. He dedicated all his time in the kitchen in his white apron working obsessively (“he ran a race with pots and pans”). “Ujházi blossomed, flourished and he was in high spirits in there. He even traveled to Debrecen, without worrying about the cost and extra hours, to get hold of the exact ingredients of his soup invention. Old roosters had to be used for this soup, whose hardened muscles carried flavours of their previous love storms. It had to be cooked for three days continuously, in order for the meat to become as one with the vegetables, especially with the legendary celery. He was especially careful not to lose the caruncle and other distinctive organs, which he superstitiously believed had power to manifest people. If such piece was offered to one of the guests, it was a sign of his special attention.”