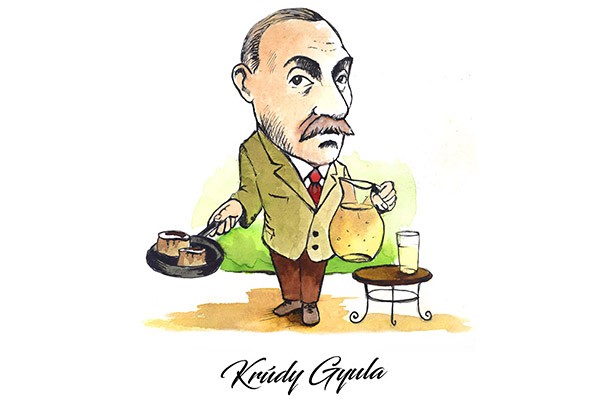 There are two gastro celebrities, two culinary stars meet on this plate: Sindbad and Tartare. Opinions are very divided regarding the origin of the story. According to the most common version, the beef was softened by the Tatars under the saddle of their horses, before they cut it into very, very small pieces (and the main rule here is not to grind it, but to cut it with a sharp knife into tiny portions). The Tatars had no time to heat (cook), so they ate raw meat. (Unfortunately this legend may sound very weak, but we do not know any better …) The consumption of raw meat is very alien to Hungarian cuisine, but no one can resist a well prepared Tartare (whether it is made of tenderloin or sirloin steak, or even salmon or vegetables). In fact, Sindbad probably would have chosen a very soft tafelspitz in a soup – or Franz Joseph (as this was his favorite dish). So why is the Tartare named after Sindbad? Of course, because of the bone marrow. From Krúdy’s hero – after the immortal film by Zoltán Huszárik – the first thing that pops into everyone’s mind is the bone marrow. However, on this plate, the bone is not cooked in the main soup, but the chef cuts it into round pieces and grills them. Capers and quail eggs – what a beautiful combination! Sindbad the sailor eats the tartare bone marrow until the last bit, ask for a drink after (of course, Krúdy’s spritzer is: 9/1 wine and water), then he just stares in silence feeling satisfied. Because: “This was the time he liked the pub the most, between four and seven in the afternoon, when he could smell the pleasant scent of cooked fat and barbeque flavours slowly lingering through the half-open top window, the tables are all cleared, the staff is nodding off and finding bits and bobs to do in the cold rooms, when everyone in the city pursuing their business, chasing their troubles or passions, when the main waiter no longer harasses the guest with courteous or annoying questions, and the pub seems so peaceful and tranquil as if it was a refectory of a medieval monastery. This was the time for Sindbad to sit with and listen to his carefully chosen friends.”